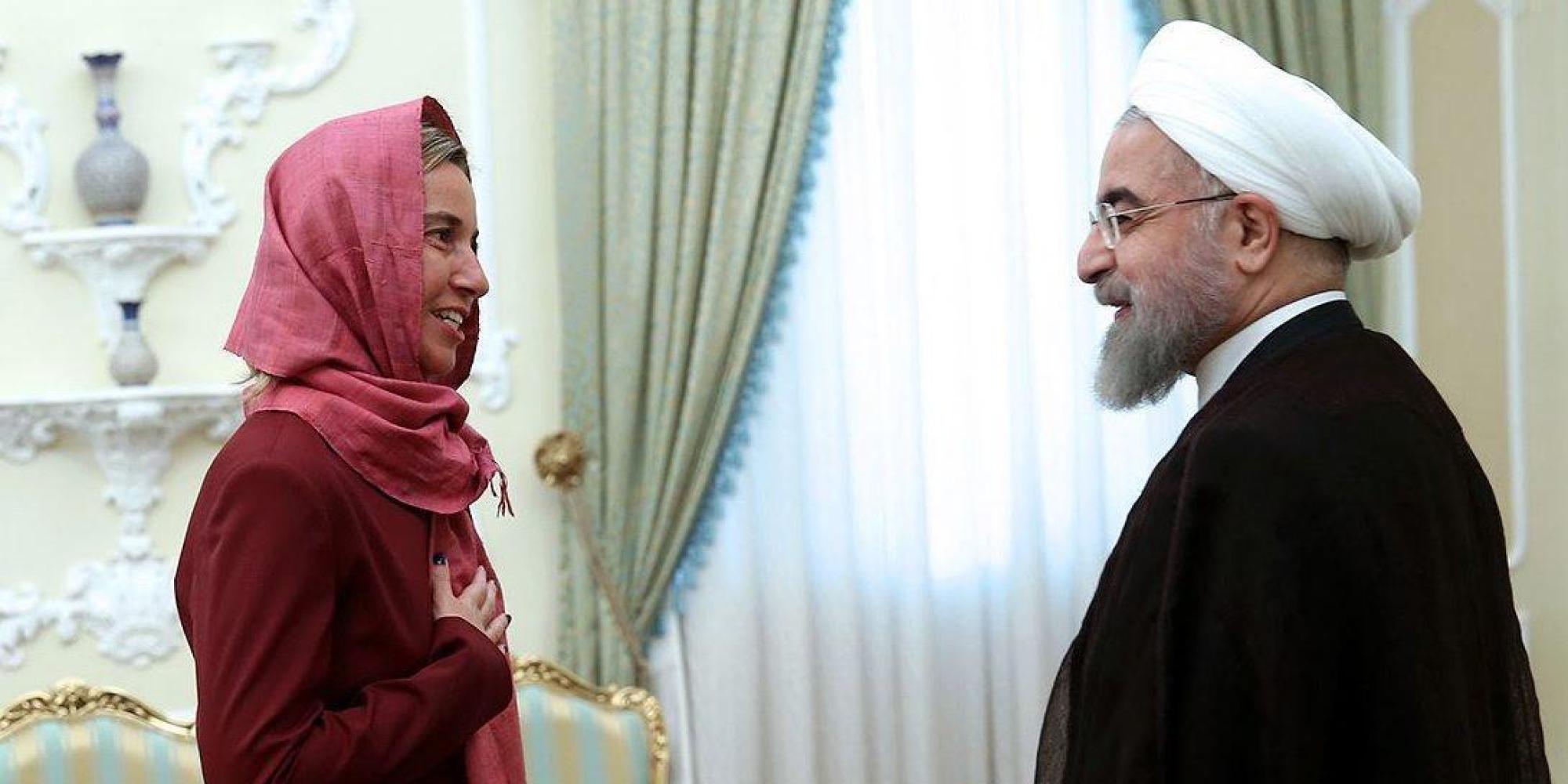 The Trump administration's decision, though unpopular with those in Europe seeking to do business with Iran, was a necessary step toward curbing a regime that fails to comply with the letter and the spirit of the JCPOA.

On October 13, 2017, the Trump Administration declined to recertify the Joint Comprehensive Plan of Action (JCPOA), and it denounced Iran for financing terrorism, imprisoning dual-nationals, and fomenting civil wars.  That decision sent a clear signal to those in Europe considering doing business with the Iranian regime:

the United States will no longer tolerate Tehran’s flagrant disregard for international law and norms.

Despite multiple indications that Iran has been violating the letter and the spirit of the JCPOA, many European countries remain resistant to challenging the Iranian regime.  In Washington, prior to the decertification deadline, the European Union, Germany, France, and Britain all launched a concerted effort to urge Congress to use its authority to maintain the status quo. Immediately following the decertification, European leaders, in a chorus, stood by the regime.  Their calls came under the pretense of security, yet failed to recognize Iran’s destabilizing aggression in the Middle East, the refugee crisis it enabled in Syria, and its continued threat to individual, regional, and global security.

At the October 3-4, 2017, “Europe-Iran Forum” held in Zurich, Switzerland, I witnessed first-hand European and Iranian representatives laud the possibility of increased business opportunities and investments in the Persian Gulf state.  The forum’s official website states that it is “a key venue for ‘business diplomacy’ between Iran and the international community” and that it offers a “conversation about the challenges, opportunities, and broader social responsibilities of commercial activity in Iran.”1

What the Forum did not cover, however, was how business investments and the tens of billions of dollars freed from crippling sanctions had aided Iran’s numerous human rights abuses or funded terrorist organizations like Hamas and Hizbullah.  Further, several of the slated speakers at the Forum had been sanctioned themselves, or formerly sanctioned by U.S. and European governments, including the Iran Mines and Mining Industry Development and Renovation Organization (IMIDRO) and the Middle East Bank.

The abundance of mainly European companies in attendance laid bare the unfortunate, yet prevalent climate, in which companies remain interested in doing business with Iran without consideration for the risks inherent in the Iranian economy.  Moreover, the perils have only multiplied due to President Trump’s new Iran strategy—particularly the imposition of terrorism sanctions under Executive Order 13224 on the Islamic Revolutionary Guard Corps (IRGC).  Just ask U.S. Treasury Secretary Steven Mnuchin, who made a public appeal to the private sector last week “to recognize that the IRGC permeates much of the Iranian economy and those who transact with IRGC-controlled companies do so at great risk.”

In fact, while the Europe- Iran Forum was attended by more than 400 officials and businessmen who were there to promote market opportunities in Iran, the conclusion went in the opposite direction.  Two-third of those interviewed underlined their increasing concerns and pessimism on the way ahead. The main reasons were U.S. sanctions regimes, huge problems in carrying out reliable “due diligence” in the Iranian market, and the lack of compliance with international norms and standards by Iranian banks. That was probably the main reason why major international banks deserted the Forum.

One company attending the forum was Air France, which last year resumed flights to Iran.  Since the JCPOA’s implementation, others in the airline and transportation industry have joined as well.  Airbus and Boeing have signed deals that could collectively bring “300 planes worth $40 billion” to Iran.  However, these large-scale business deals are instrumental in Iran’s efforts to fuel ongoing conflicts, including the war in Syria.  According to research published by the U.S. Department of the

Treasury, the regime in Iran has been using commercial flights to fund militant groups since at least 2000.  More recently, it has been ferrying troops and weapons to Bashar al-Assad’s regime in Syria and lending military support to Hizbullah.

Another participant, Germany’s Siemens, recently signed a $1.6 billion agreement to build trains and upgrade tracks in Iran.  The agreement was not its first; in 2008, the company partnered with an IRGC-controlled telecom monopoly to build technological capabilities for Iran to monitor and censor the Internet.  During the unrest following its 2009 election, Iran used the technology to thwart protests by blocking communications, collecting information on individual users, obstructing access to social media, and ultimately threatening bloggers and detaining journalists.

Not to be left off of Iran’s financial deals, oil and gas ventures are among Iran’s and the Western world’s biggest transactions.  Other major European attendees at the Forum, such as Royal Dutch Shell and Italy’s ENI, have each submitted applications for projects with the National Iranian Oil Company, a front group for the IRGC that has been linked to human rights violations, Iran’s nuclear program, and support of terrorism.  Undoubtedly, these oil and gas projects could add up to $200 billion in investments and would feed the IRGC’s coffers and facilitate the group’s continued abuses.

The Trump Administration’s decision, though unpopular with those in Europe seeking to do business with Iran, was a necessary step toward curbing a regime that fails to comply with the letter and the spirit of the JCPOA.  Furthermore, it should serve as a reality check to businesses seeking to engage Iran, sending a clear message that doing so aids and abets the world’s leading state sponsor of terrorism and risks isolation from the American market.

Given those concerns, the United Against Nuclear Iran (UANI) organization made demarches to Italian companies and administrations which have signed deals with Mahan Air to make them better acquainted with the risks of secondary U.S. sanctions and application of U.S. Presidential Executive Order 13224. Furthermore, UANI has drawn the attention of dozens of Italian companies reportedly active in critical sectors of the Iranian economy that expose them to investigations and sanctions. Major Italian banks were contacted by UANI; the same was done with the Bank of Italy. In most of these cases, lack of adequate information was evident at every level about legal and business risks of dealing with Iranian entities.

Similar considerations apply to the Budget Law just tabled by Italian Prime Minister Paolo Gentiloni. The new law includes a specific clause (article 32) aimed at promoting Italian export and investment in countries classified by the international Financial Action Task Force (FATF) with a high degree of risk. The proposal allocates to a National Agency – Invitalia – funding up to 1 billion Euros in export guarantees and insurance available for the Iranian market.

The Italian Government has emphasized that the new measures are intended to boost Italian companies’ presence in the Iranian market. The Italian taxpayers and individual investors will bear the burden of an ill-advised policy that encourages companies to take enormous risks in an “Iranian Eldorado” which doesn’t exist. To mention just some examples, in December 2016 – as reported by the Wall Street Journal– New York’s top banking regulator fined the largest Italian Bank, Intesa San Paolo  SpA and its New York branch, $235 million for violation of the state’s law prohibiting money laundering and bank secrecy, including the masking of  transactions involving Iran. According to the New York State Department of Financial Services, the bank “specifically trained certain employees” to obscure money-processing activities involving Iran.

Earlier, in 2014, another Italian company, Dettin S.p.A., active in the petrochemical business, was listed by the U.S. Treasury among the companies not in compliance with the sanctions regime.

It would be wise for European governments and institutions to undertake an in-depth review of their approach toward Iran. Full transparency and adequate information made available to the public is an essential requirement.