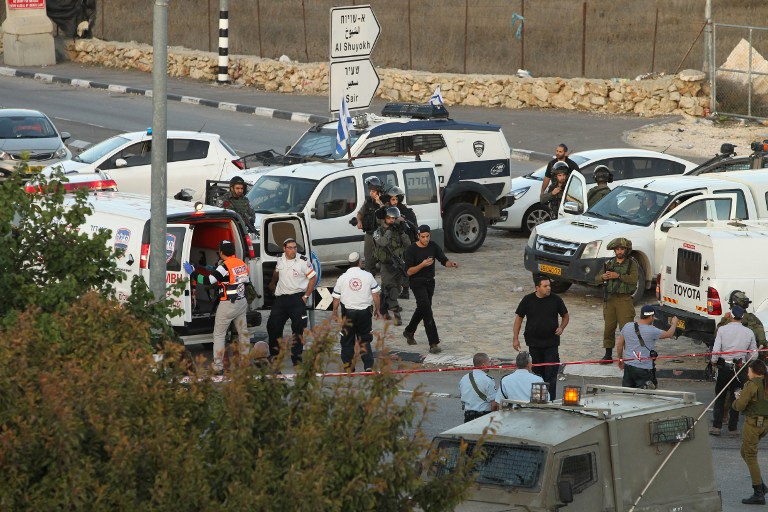 In Israel, you will find there is heavy presence of security, both uniformed and not, at major sites, as well as concrete reinforced barriers at key landmarks and bus stops, to prevent vehicular rammings.

Similarly, it was not until the London Bridge car ramming in June this year that killed 8 people, that UK Prime Minister Theresa May said "enough is enough". But therein lies the problem.

Jihadists have been waging terror in Europe for years now and 'enough' was enough after the first attack. But European leaders have largely been in denial, only now beginning to concede there is a problem, and even still, many refusing to identify and confront the radical Islam at the root of this war.

These might be so-called 'lone wolf' terrorists, but they are united by the same homicidal ideology, with pledged allegiance to the Islamic State (Isis).

The vehicular terror attack in Barcelona follows a similar wave of car ramming attacks in Nice, London, Paris, Berlin, and Stockholm over the past year, which have claimed a combined total of 130 lives.

But the sober reality is that this wave of vehicular terror we are seeing across Europe now was pioneered by Palestinian terrorists in Israel, when the world mostly looked the other way, trying to downplay, excuse or just plain ignore the attacks, seeking to differentiate terror in Israel from terror in Europe. Today, Islamic jihadists are copying and exporting this murderous methodology across Europe.

So, what can be done about this, and specifically, how can Europe stop this wave of car rammings by 'lone wolves' and what can it learn from Israel?

First and foremost, European leaders must diagnose the problem and identify their enemy. You cannot win a war unless you know who you are trying to defeat. It is not just plain 'extremism', some generic form of 'terrorism' or a mass outbreak of undiagnosed patients suffering 'mental health'. The enemy has a name and that name is radical Islam.

The European Union appears to have no problem labeling Israeli pickles and tomatoes produced in the West Bank, yet many still seem reluctant to call out Islamic terrorists by their name and label radical Islam as the root of this wave of terror sweeping the continent.

One area in particular in which Europe can learn from Israel is in cyber security and counter-terrorism surveillance, in which the Jewish state is an unparalleled leader.

Speaking at a cyber-security conference in June, Nadav Argaman, head of the Shin Bet (Israel's internal security agency), revealed that the agency has used cyber-technology to prevent more than 2,000 terror attacks since the beginning of 2016.

Argaman added that Israel has used cyber-technology to specifically protect against 'lone-wolf attacks' inspired by social media incitement that would have been unpreventable otherwise using traditional intelligence-gathering tools.

European leaders need to engage their Israeli counterparts, both in the public and private spheres, to learn and apply these best practices to monitor online channels and conduct surveillance, including of Mosques, which are incubators for terror, in order to pick up on clues, identify and stop would-be terrorists before they have the opportunity to carry out an attack.

There needs to also be a greater physical presence of security, including armed officers and barriers in major public places and landmarks, which are glaring targets for potential terrorists. Many police officers across Europe, especially in the UK, do not even carry firearms.

In Israel, you will find there is heavy presence of security, both uniformed and not, at major sites, as well as concrete reinforced barriers at key landmarks and bus stops, to prevent vehicular rammings.

As unpalatable as it may be to European sensitivities, they must begin to apply profiling risk assessment as a measure of precaution and prevention. The stark reality is that a Caucasian mother does not fit your profile of a typical terrorist in this scenario, with all terrorists in the car rammings so far being male Islamic jihadists between roughly the ages of 20 to 40.

However, for profiling to be successful, Europe would do well to again follow the lead of Israel in this case, which does not apply a blanket profiling of entire ethnic groups, but are trained to observe body language, physical signs and other clues as to erratic behavior. The curtailing of some personal freedoms will be a small price to pay for the lives of many.

There are other steps European leaders ought to consider, as part of their overall strategy to prevent lone-wolf attacks, including refusing re-entry to those who have gone to Syria, Iraq and elsewhere to fight for Isis and stripping citizenship of dual nationals caught committing acts of terror on European soil.

As difficult as it may be to accept, the dream of Schengen open borders cannot continue in its current form, with unfettered borders and lax security checks, where terrorists can freely move from one country to the other without so much as a glance from authorities.

Europe also cannot be serious about fighting terror on the one hand and embracing Iran on the other. Iran continues to be the foremost global state sponsor of terror. Their support of Assad regime is a primary cause of Syrian refugee crisis and spread of Isis, as well as Hezbollah operatives roaming freely across Europe. Tehran is not a partner in the war on terror, it is one of the primary instigators of global terror.

Preventing 'lone wolf' attacks 100% of the time is simply not feasible, but greater steps can be taken to minimise the threat.

This will require bold leadership and a recognition that whether it is Barcelona, Nice, London, Berlin, Stockholm or Jerusalem, terror is terror and the West must stand united, in unwavering solidarity and commitment if we are to defeat this global evil.