The Friends of Israel Initiative Chairman Jose Maria Aznar gave a speech to the New York delegation of the Jewish Federations of North America during its visit to Spain. 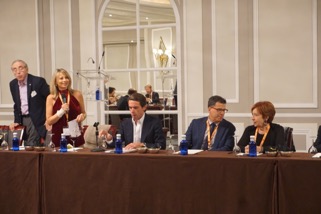 On October 16, Jose Maria Aznar, the Friends of Israel Initiative (FOII) Chairman and former President of Spain, made a warm speech to the New York delegation of the Jewish Federations of North America (JFNA) during its visit to Spain.

Aznar remarked why FOII was created seven years ago, and what have been its main achievements. He also highlighted what are the challenges to come for Israel and for the West; two realities that Aznar and FOII see as parts of the same body, with common values and shared goals.

He also analyzed the current state of the World today, and why he believes we are entering a period of fragility, uncertainty and risks. In this regard, Aznar focused on the clear assault to the post-Cold War liberal order, the rising power of China, the revolutionary forces that attack the system itself such as North Korea and Iran, the Islamist terrorism and the ongoing crisis that Europe is undergoing nowadays.

Aznar finished his intervention reminding the audience that "If Israel falls, we all go down".